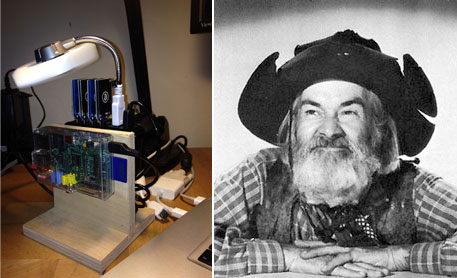 Santa brought me a new Raspberry Pi board and I’ve been itchin’ to do something with it. When I found a set of four USB Bitcoin mining ASICs for $100 on eBay, I figured it was time to do a little bit of cryptocurrency prospecting. So, I built a RPi Bitcoin mining rig that I have lovingly named Gabby Hayes.

I borrowed heavily from a couple of how-to documents from RaTTuS and Collin Cunningham. I didn’t do anything fancy on this project as you can see from my highly sophisticated plywood stand. My plan is to stick this little rig in the corner of my office for a few months and see what it can churn out.

Currently, Gabby averages about 1.3 gigahashes per second. As of this writing with Bitcoins trading for about $830, that translates to approximately US $0.35 per day in earnings. So, no, I do not intend to get rich on this little project. If I’m lucky, this experiment will pay for itself in about a year.  This is just a hobby project to learn more about the cryptocurrency phenomenon that’s currently happening around the world.

I have not wandered too far off the beaten path here when it comes to both Bitcoin mining software and Raspberry Pi. However, I have a few lessons I learned already, so I figure I will state them hear so the next person can find their answers by way of Google.

So, will we all be paying our utility bills in Bitcoin, Litecoin, Dogecoin, or Coinye West in the near future? Probably not. However, I do believe that what is going on with cryptographic currency markets right now will, at the very least, become a chapter in Economics 101 texts in the next 20 years. Having a monetary system that is decentralized and chain searchable makes for great debate in areas of transparency and reputation based economics. That’s my 0.00002467BTC (~$0.02 USD).